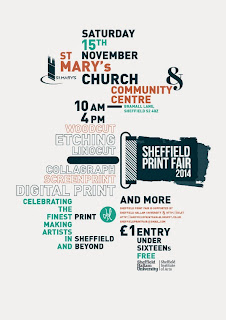 November is probably the busiest month of my year and over the next few weeks I'll be going to Oxford, London and Nottingham. This weekend I'll be exhibiting at Sheffield Print Fair as well giving a screen print demonstration there. There are printmaking demonstrations throughout the day and they are a good opportunity to learn about different techniques. I've done the print fair once before and was really impressed by the quality of work on show. I'm looking forward to seeing some great prints and meeting lots of other print-makers.
Sheffield Print Fair
Saturday 15th November 2014 10am-4pm
St Mary's Church & Conference Centre
Bramall Lane
Sheffield
S2 4QZ
sheffieldprintfair.blogspot.co.uk

Posted by karoline at 11:59 No comments: 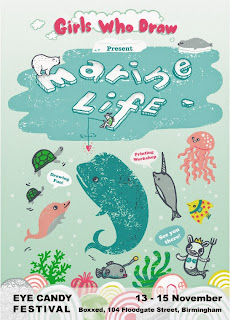 Girls Who Draw have been offered a commission for this year's Eye Candy Festival in Birmingham. The festival is a great opportunity to promote ourselves and our Marine Life postcard book but it's also quite a challenge. Everyone involved in the book is so busy, we're very rarely in the same place at the same time. Added to which we are based in different parts of the country including Birmingham, London, Liverpool, Leeds, Manchester and even Cornwall. So it's taken a while to organise our contribution but there will actually be four of us at Eye Candy and we'll be running printmaking and drawing workshops throughout the festival. I'm particularly looking forward to a visit from Belinda Chen. She'll be taking a break from screen printing at East London Printmakers to come and help me run a screen printing workshop at Eye Candy on Friday the 14th of November.
Eye Candy Festival 13th - 15th of November 2014
Boxxed
104 Floodgate Street
Digbeth
Birmingham
B5 5SR
eyecandyfest.tumblr.com
Posted by karoline at 11:40 No comments:

Witches at the Royal Shakespeare Theatre 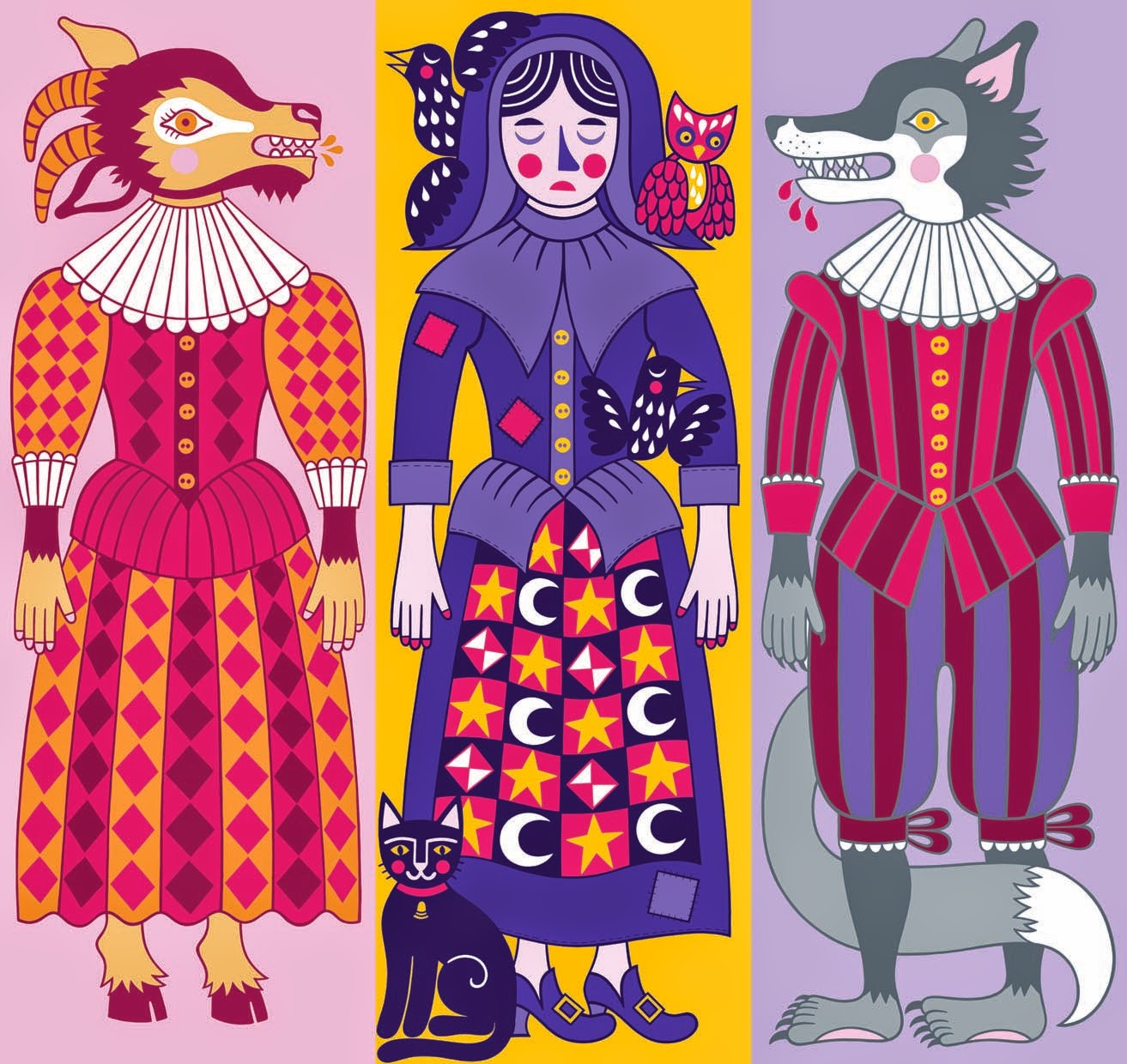 At the end of summer Girls Who Draw were commissioned by the Royal Shakespeare Company to create another set of characters. This time we each had to illustrate a witch and two humans who had been transformed into animals! I chose to look at Elizabethan woodblock prints of witches for inspiration which is why my characters are dressed in Tudor style costumes. 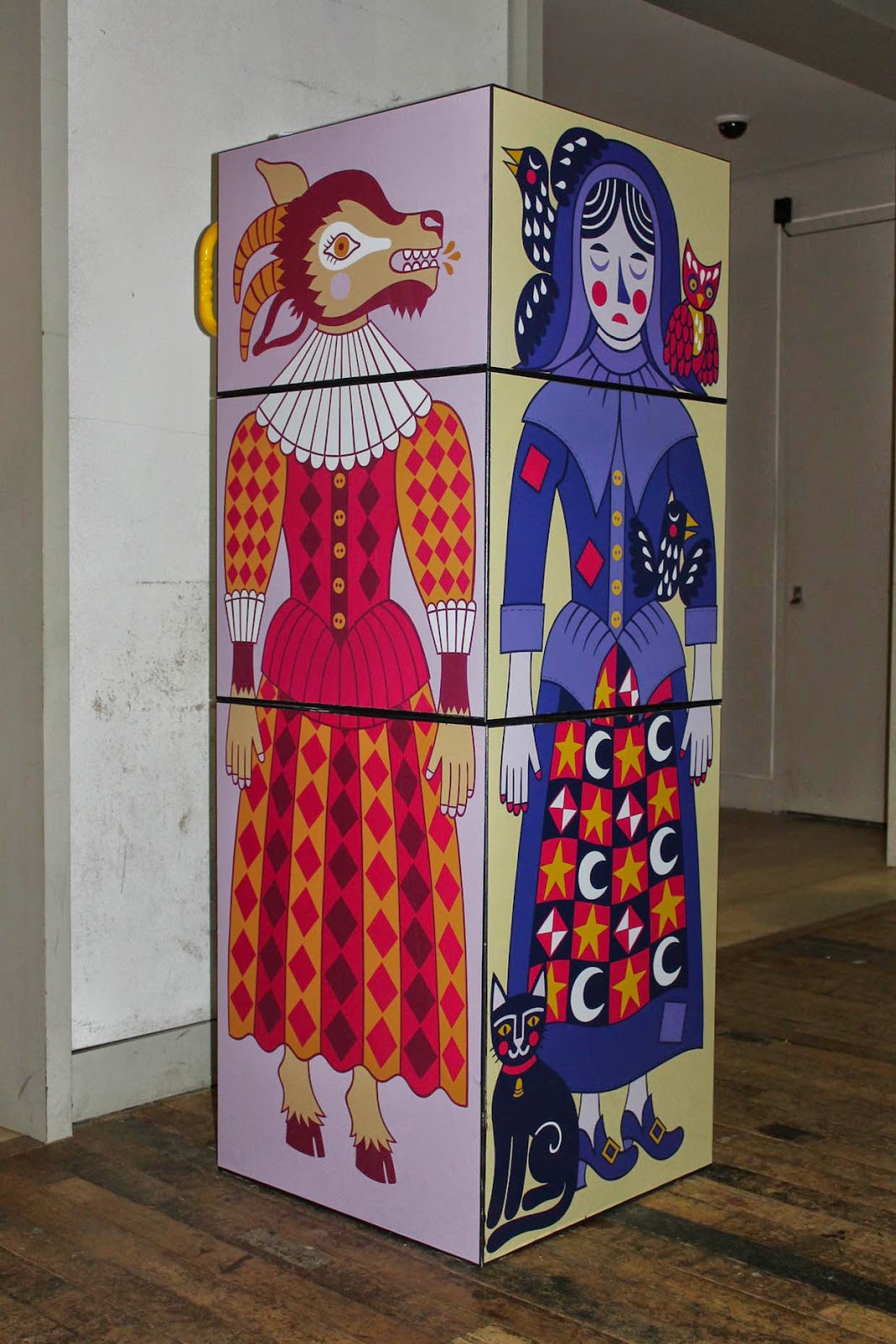 Once again the characters were printed life size onto vinyl and applied to the same wooden blocks as in the Who Wears the Trousers? exhibition. But this time the blocks were positioned in different places around the theatre and used for a Halloween Activity Trail. I've been waiting a while to see the finished witches and finally got to see them in situ during October half term.
Posted by karoline at 11:53 No comments: