Earlier this year I was contacted by Lisa Meyer from Capsule www.capsule.org.uk after she was invited to curate an exhibition for the Royal Shakespeare Company inspired by the Swan Theatre production of The Roaring Girl. The central character from The Roaring Girl is the notorious thief Moll Cutpurse who dresses in men's clothing. Lisa wanted to work with Girls Who Draw on an interative family friendly exhibition which explored cross dressing in theatre. Her idea for the exhibition was a series of wooden blocks with life size characters on each side. The blocks would each be divided into three moveable sections so they could be turned and the characters mixed up like a three dimensional exquisite corpse. Luckily designing and making the blocks was not my job, I just had to create a set of three characters, find seven other illustrators to draw characters and organise getting all the artwork from them. Not only did we each have to produce full colour artwork but we also had to provide black and white line art for activity sheets. It was definitely a challenge but a really interesting project and a great opportunity to work with some regular Girls Who Draw contributors as well as new ones. 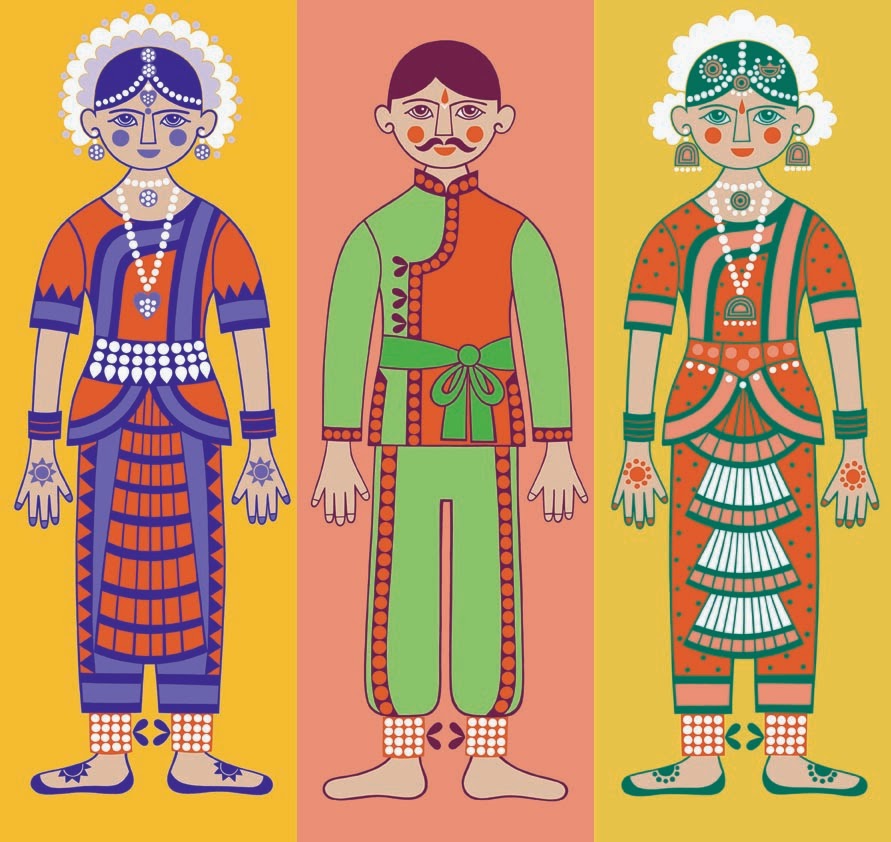 Much of my illustrative work is inspired by folk art and craft from around the world so I wanted my characters to reflect this. But many traditional costumes follow the norm of skirts or dresses for women and trousers for men. The main exception to this seems to be India where, in many regions trousers are part of traditional dress for both men and women. These styles have remained popular and also influenced contemporary Indian clothing so that they do not appear unusual or novel even here in the UK.


My female characters are inspired by Odissi and Bharatanatyam dancers with their ornate jewellery, head dresses and trousers with pleats which open and close during dances. By contrast my male character is inspired by Kathak dancers and in particular the simpler Mughal style of costume. 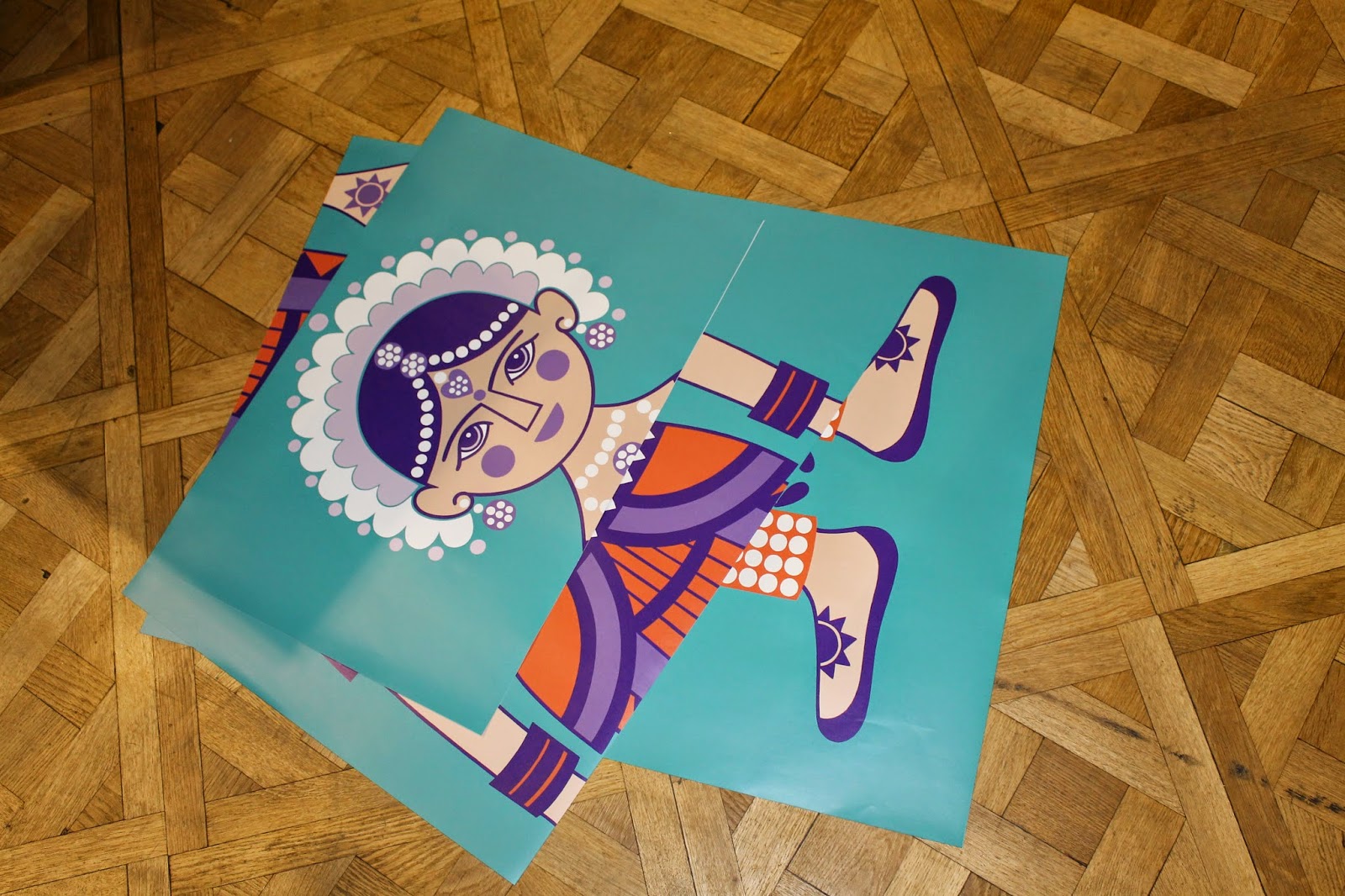 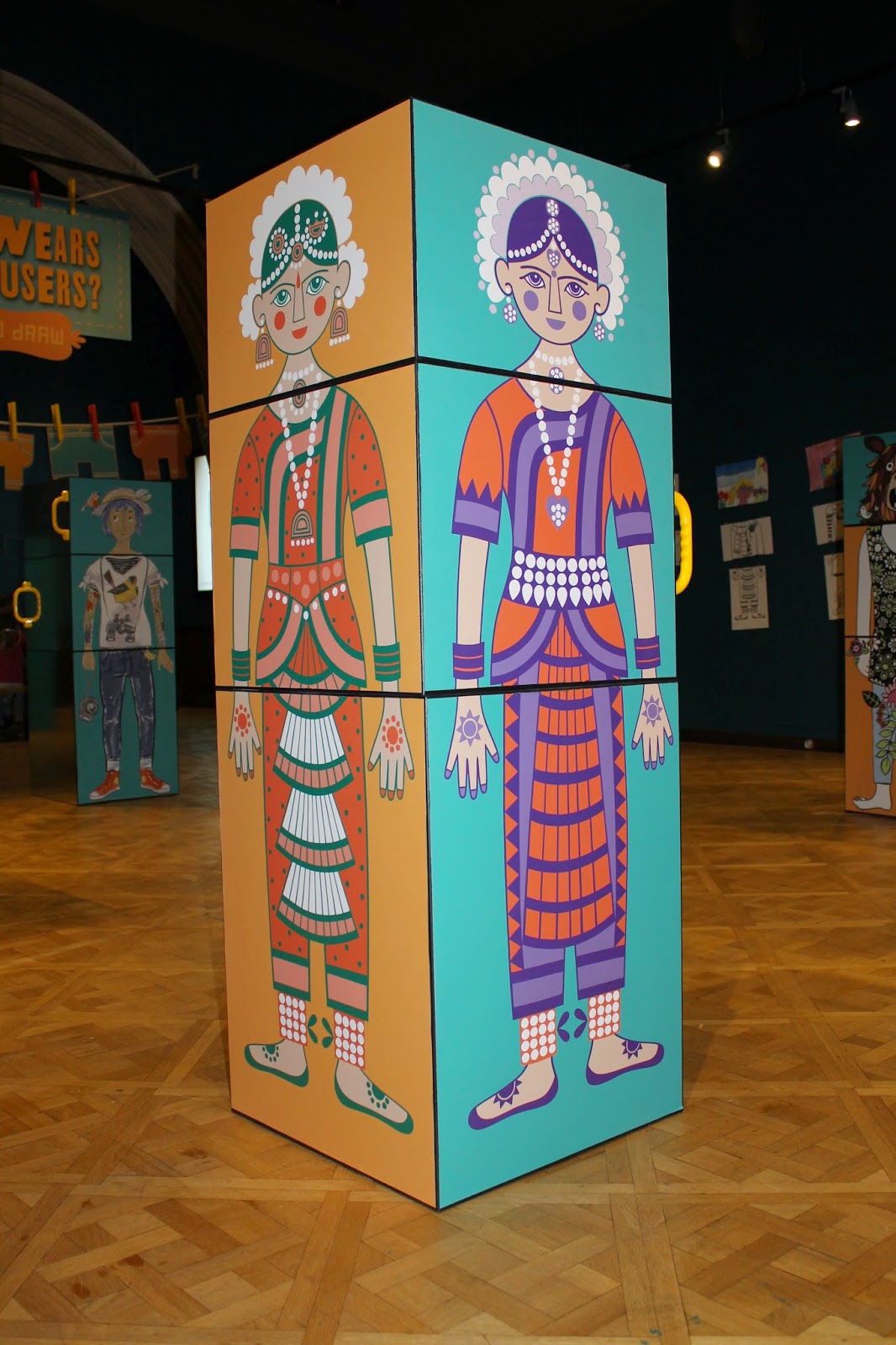 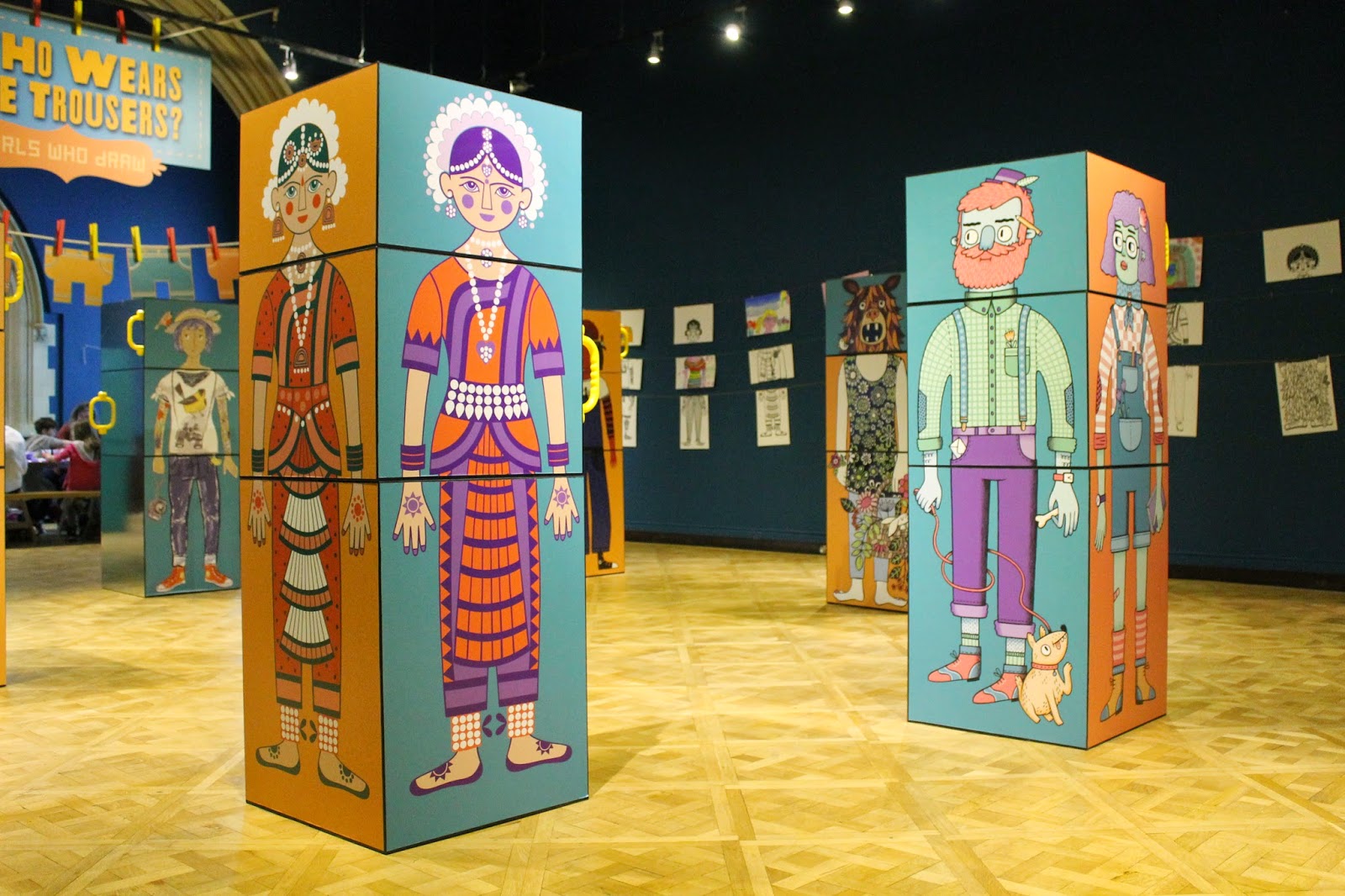 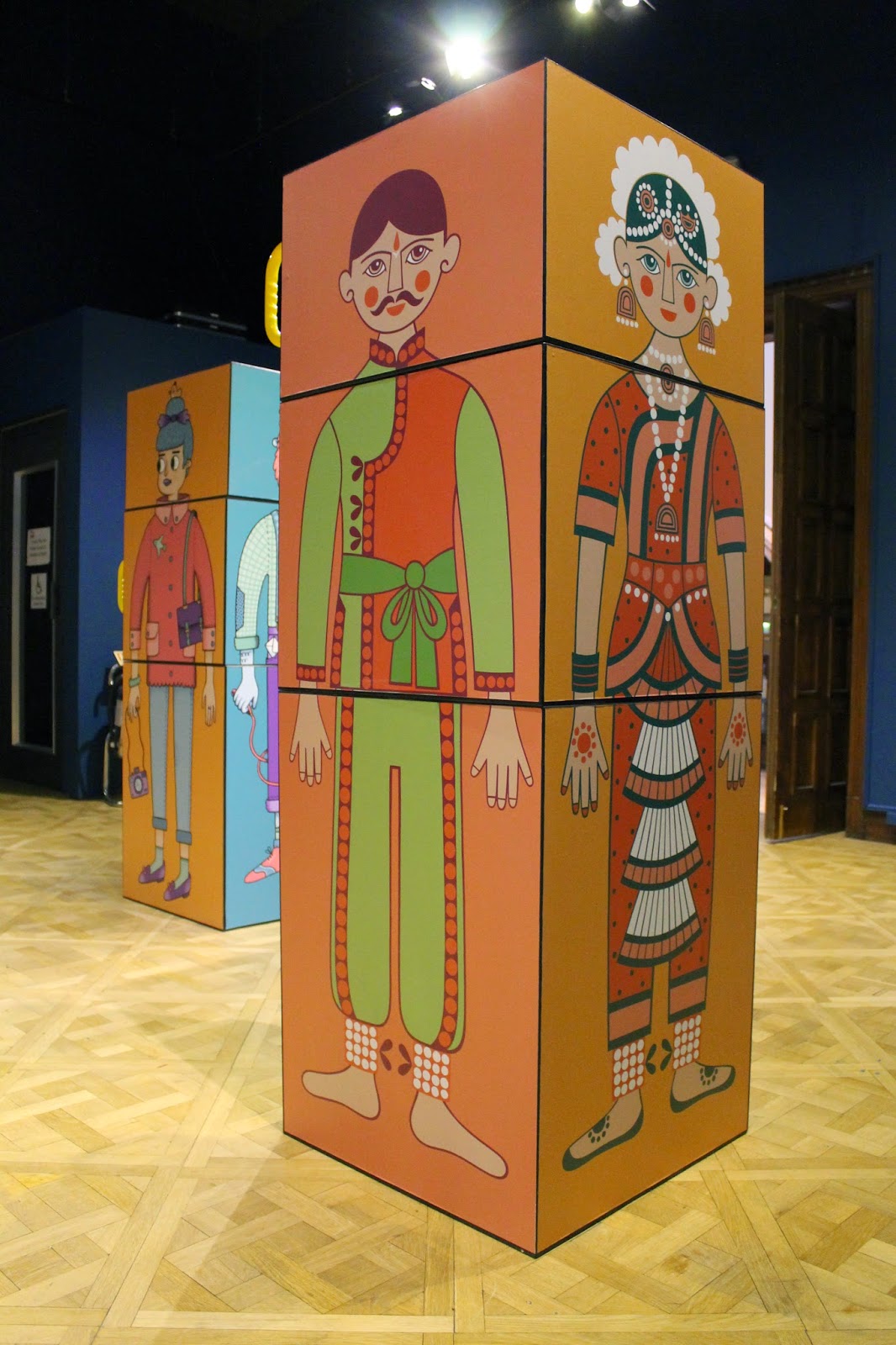 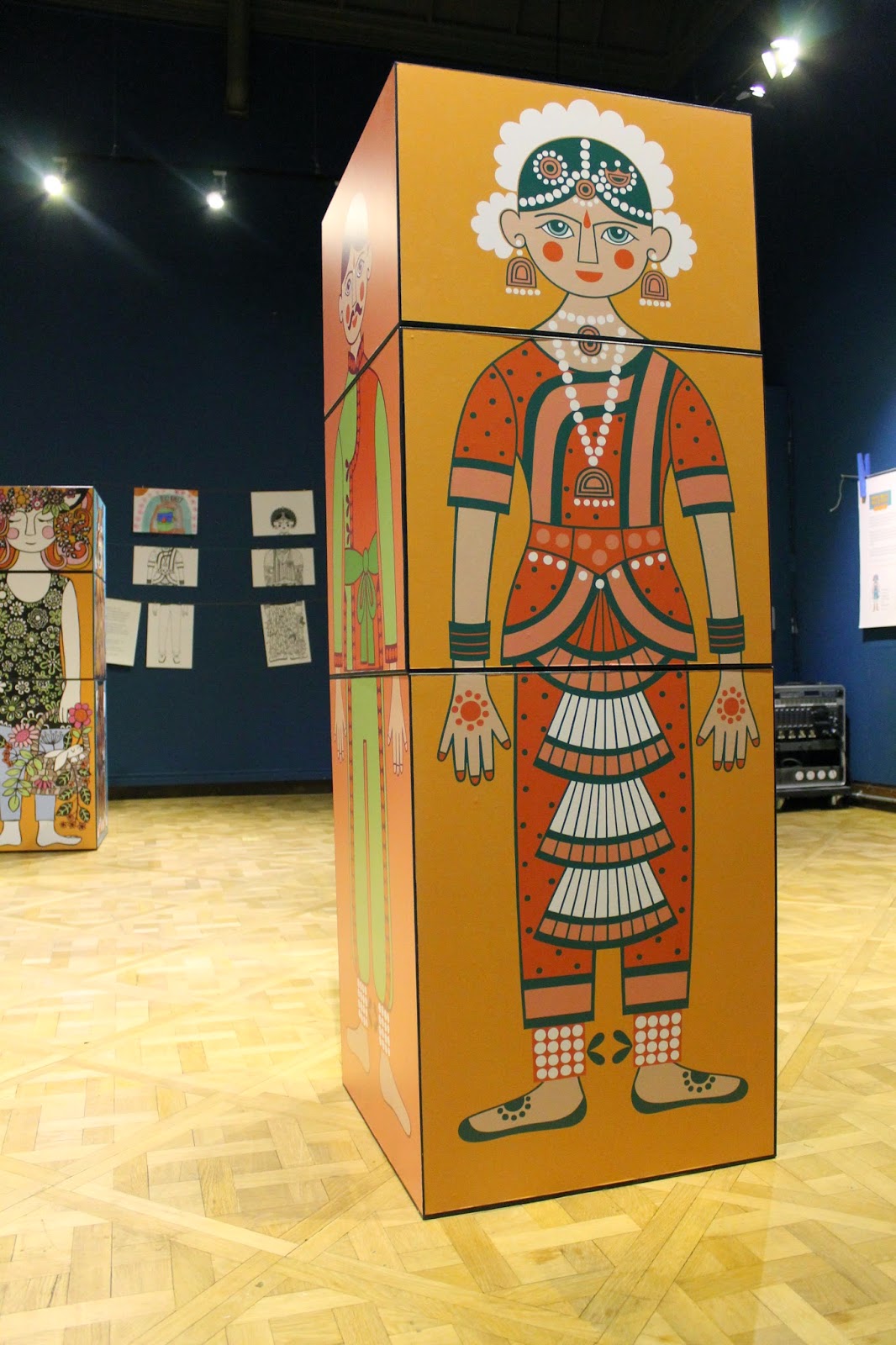 All twenty four finished characters were printed onto self adhesive vinyl and installed on eight wooden blocks along with mirrored vinyl so one side of each block is reflective. The wooden blocks were the work Joseph Welden www.weldensheed.com who always seems to be able to make even the most challenging ideas a reality. Just as required he made the blocks in sections so they can be turned and also put things inside so the make a noise when moved.

The characters can still be seen and heard in the Who Wears the Trousers? exhibition at the Royal Shakespeare Company until August 31st 2014.

Posted by karoline at 12:27 No comments: